Keep calm and carry on with sustainability — with respect, honesty, and compassion

An open letter to our global community

The recent election results in the United States have caused strong reactions around the world. In this letter I offer some reflections on how those results (and others like them) are likely to impact sustainability work. More importantly, I’d like to share my perspective on what I think people who work in this field — or who care generally about trying to create a better world — are called to do now.This is not a political letter, though it was triggered by political events. As you will discover if you read through to the end, I believe the most important task facing us now is a rebuilding of the basis for civil discourse, based on facts, conducted with compassion and respect.

As a dual US/Swedish citizen living in Stockholm, I participated in the US election, and I followed it closely. Frankly, the results were a shock — because all the major media outlets (such as the New York Times) had predicted, with high confidence, a Democratic victory.

Essentially the mainstream media and polling operations in the US were out of touch with the reality of what was happening, politically, in the US. That was shocking all by itself.

Personally, I was disappointed with the outcome. Although I am a political independent, I endorsed the Democratic candidate. I had never publicly endorsed a candidate for US president before, but the Republican candidate, now US president-elect, was on record as strongly opposing or intending to undermine many of the agreements, issues and values that I associate with sustainability.

It is a statement of fact to note that the future of US positions on those issues — from the 2030 Agenda to the Paris Agreement to international conventions on human rights — is very uncertain now. In a recent video statement, the president-elect said he intended to dramatically increase fossil fuel production in the US on his first day in office, dropping restrictions on coal production and “fracking” with an intent to produce “millions of jobs”. This will not be good for accelerating action on climate change. More importantly, it demonstrates conclusively that the president-elect is not yet getting well briefed: coal-mining has collapsed in the US not because of regulation, but because of market forces. Increasing coal production would require massive subsidies that virtually no economist, on the left or the right, would consider wise.

On the other hand, less than 24 hours later, the president-elect told the New York Times that he had “an open mind” on the Paris Agreement. He reversed his position (he had previously called climate change a “hoax”) and acknowledged that humans were influencing the climate.

Which means: we do not yet know what the next US administration will do.

In times of uncertainty like this, it is important to remember that the sustainability movement has survived previous shifts of power in the US and in other countries. Traditionally, sustainability advances in “progressive” government administrations, and moves more slowly in “conservative” periods. There are exceptions: leftist governments have strongly opposed sustainable development, and rightward leaning ones have championed it. But the general pattern I described is true for most countries.

In the US context, sustainability was advanced (politically) during the Bill Clinton years; it was slowed by the George W. Bush administration (though it moved forward in the military, I consulted to the US Army in those years); and then advanced again under Obama. Trump will very likely slow the sustainability agenda down again, at least in government, though probably not in business. (Many corporate leaders in the US have already made it clear that their intention is to keep moving on sustainability, no matter what the government does. See the links at the end of this letter.)

So sustainability work will continue to move forward. The work we are all doing to promote and support it, in business and NGOs, in the UN and government agencies, has become all the more important to maintain that momentum.

However, these new times are different, in fundamental ways. I want to focus on two of those ways.

One of the most worrying aspects of the recent political elections in places like the US and UK is how facts, evidence, and objective truth were reduced in importance, sometimes to the point of being completely ignored. I personally consider empiricism and honesty to be foundation stones. Sustainability work rests on these core values. Seeking out scientifically-established and research-based facts about what is happening, and communicating them truthfully, is essential for identifying problems, tracking related trends, and documenting the spread of solutions.

When facts and truth become devalued, especially among a powerful elite with the ability to influence large segments of the public, advancing sustainability becomes a great deal harder. Sustainability proponents must work extra hard just to put verifiable facts on the table for discussion.

A second, obvious worry is the general decline of civility and tolerance that has accompanied these recent national political campaigns, which have received so much media attention that they have affected the public mood globally. A general meanness, hard-edged sarcasm, and/or generally reduced level of respect has infected the public discourse, on the left and the right, and sometimes even in between. (I’ve had to battle the tendency towards sarcasm within myself, because it is such a satisfying outlet for frustration.) Groups with differing views do not really speak with each other, and increasingly do not even debate properly. The mainstream media have focused increasing attention on the people who make incendiary statements, or use humiliating satire, or even just swear and call each other names. (We had an incident of this, in the mainstream parties in Sweden, just last week.)

Somehow, being serious and principled and respectful is now considered boring. This, to my mind, is the most dangerous and unsustainable development of all.

I believe these are trends that we must stand against — or rather, I believe we must stand for basic human decency, dignity, compassion, and mutual respect. We must also stand for a serious public dialogue based on established facts, the quest for knowledge, and efforts to come as close to the truth as possible.

At least, this is what I plan to do. I also plan to reach out to my friends and colleagues who do not share my views on the issues I care about, hear them out, and try my best to communicate respectfully across differences of view. 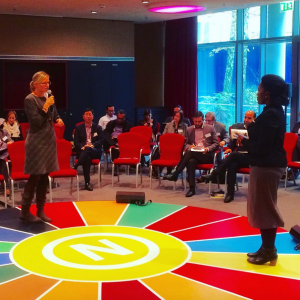 Scene from the Open SDGClub.Berlin

As I conclude the drafting of this letter, I am sitting in the Berlin airport, after facilitating a meeting for about 80 representative leaders from government, civil society, and the business community engaged in sustainability work, from over 30 countries. Convened by the German Council for Sustainable Development, and calling itself the “Open SDG Club of Berlin,” this group spent three days talking about how to move the sustainability agenda forward — despite headwinds and obstacles. It was a wonderfully successful experiment in dialogue, with a round center stage and many opportunities to speak as much truth (and inspiration) as we could muster. I discovered that many of my perceptions and intentions, as expressed above, were in close alignment with the views of these colleagues, who brought with them experiences from South Africa and Colombia, Indonesia and Hungary, China and the UK, representing the political left, right and center, and the global north, south, east and west.

It was energizing to stand in the midst of that diversity, united in common purpose, and I want share that energy with you: there is a large global community of people who, no matter what, intend to “keep calm and carry on” (as a colleague from Barcelona put it, referencing a common British phrase) with the work of promoting transformation, innovation, integration, learning, and inclusion — with sustainability as the goal.

As a South African colleague reminded us at this Open SDG Club meeting, our ability to practice values such dignity, honesty and respect are what make us human. In times of uncertainty, these fundamentals are the best compass for keeping us on track. I am personally going to strive all the harder to uphold these values, and to reflect them in my work — which I continue, with refreshed commitment, to pursue to the best of my ability.

I look forward to continuing to work with all of my friends and colleagues around the world to realize the promise of sustainable development. No matter what.

Special thanks to Arnau Queralt, of the Sustainable Development Council of Catalunya, who introduced the “Keep calm and carry on” theme to the Open SDG Club – Berlin. We needed that, Arnau.
Links:
Article in the London Telegraph on the decline of coal prices globally
News report in Forbes magazine on the US corporate letter on the Paris Agreement
Incident of name calling in Swedish politics
Information about the first Open SDG Club of Berlin