Letter: The Historic UN Agreement on the 2030 Agenda for Sustainable Development 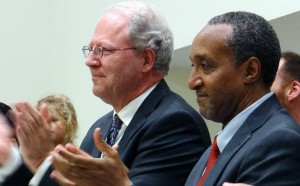 The agreement reached on the new Agenda 2030 for Sustainable Development on Aug. 2 at UN headquarters, is truly historic. There is always something to criticize in these UN texts, and no doubt the complaints about what was left out or left vague and unspecified will be many — and even justified. But we should never lose sight of the fact that this is the first time in human history that the entirety of humanity — with the important qualifier, as represented by the governments of nation states — has come together in agreement on a set of common goals for the future development of our world.

Just how big is that? Personally, I think it is so big that we will not really understand the significance until at least a decade from now.

The negotiations were concluded by professional diplomats, in a UN conference room, in New York City. But over three years, thousands of people actively contributed to this process, and probably hundreds of thousands more were engaged in some way. Working together, they created something that is truly “new under the sun”.

This new agreement, which I have been hash-tagging #2030Agenda, does three enormous and amazing things:

1. Puts forward a set of longer-term, systemically integrated goals for the entire world
2. Frames the process of reaching those goals in terms of “transformation”
3. Erases the distinction between “developed” and “developing” countries, making the whole agenda universally applicable, across countries and even sectors

This will result in nothing less than a revolutionary change in how the world talks about, funds, and then implements development work. I can report, from first-hand experience, that this new approach is already causing ripple effects into governments around the world, both “rich” and “poor”. Not only are policies being affected (national development plans being rewritten to line up with this new integrated, transformative, universal approach), but also power balances between and among national-level ministries are already being shaken up … and they will be further shaken up, as the implications of what this Agenda calls for are taken into account and acted upon.

So do not let anyone tell you that the new SDGs — the 17 goals and 169 targets that are embedded in the agreement — will not make a difference. The difference is already being felt … and the goals have not even been formally adopted yet. That formality will occur in late September, during the world’s largest-ever gathering of heads of state, at UN headquarters. But with the agreement already in place, that event will be mostly ceremonial and symbolic — as it should be.

And yet, this new agreement was barely even covered in the mainstream press. The New York Times, for example, ran just a bland Associated Press piece.

Many of my friends in the global sustainability movement were part of this process, and we in AtKisson Group also put our oar in the water to contribute to the, especially through our Pyramid 2030 initiative, which will soon transition into a new phase. I have also been fortunate to work for the UN Secretariat during this period, as a consultant. That experience has given me a deep appreciation for the hard work and dedicated effort that has been required to achieve something this complex. The new “2030 Agenda” should be seen as a major milestone on the path to what everyone working in sustainability, around the world, has been trying to realize for many years: the full mainstreaming of this transformative vision.

And now the attention shifts to implementation. Guess what is needed? All the things that people who work in sustainability have already been doing, from integrated planning to training change agents to creating better indicators … more and more of it, everywhere.

We in the AtKisson Group, although we were pioneers, are hardly alone in being a provider of “integrated” and “transformational” approaches to sustainable development. Fortunately, these kinds approaches have spread to many other companies, consultancies, institutions and networks. This is something that we celebrate: the implementation of the SDGs will create many new needs and opportunities for this kind of work, and the world needs a veritable army of both professionals and amateurs to do it. (This is something I wrote about way back in 1999, in the closing chapter of Believing Cassandra. It is extremely gratifying to see that this army now exists … and is growing.)

One of the best sources of information about what happens in the UN is the International Institute for Sustainable Development, better known as IISD. I strongly recommended that you read their brief summary of the three year-process and its successful conclusion last weekend in New York. (It’s not easy to find: go to this link and then scroll way down to “A BRIEF ANALYSIS OF THE MEETING”.)

Don’t forget to look at the pictures of the earnest and then jubilant delegates, and take a moment to reflect with gratitude on the excellent work of the process’s two co-facilitators, the UN Ambassadors from Kenya and Ireland, and the UN staff who supported them throughout.

This is a story we all need to know. And celebrate. And then … on we go, to make it all happen.