The Clothes “We Don’t Need”

The following article was written by Anna Brismar, founder of Green Strategy Sweden. Anna works as sustainability consultant within the fashion and textile field, with extensive expertise in the area of water, environment, and sustainable development. Anna has been a member of AtKisson Group since 2015.

In an interview in The Guardian in early 2015, H&M’s CEO Karl-Johan Persson expressed that if we stop buying things that we do not need, it will lead to an economic and social catastrophe. Specifically, he stated that:

“..if we [people] were to decrease 10% to 20% of everything we don’t need, the result on the social and economic side would be catastrophic, including a lot of lost jobs and poverty.” (The Guardian, 2015)

It is a common perception among conventional economists that the world’s economies, especially in developing regions, depend on continuous material consumption and production in order to keep societies and their markets alive and growing. Thus, instead of decreasing the production and consumption of goods, CEO Karl-Johan Persson places his hope in innovation: “So the challenge is doing it in a way where you still can have economic growth and jobs creation, while finding the innovations that can limit the damage to the environment”. The greatest opportunity, he continues, lies in the circular economy, which enables companies to move away from the current linear system of produce, use and throw away. This is where H&M’s investments in global take-back schemes and textile recycling come in, which are indeed important parts of the equation.

Undoubtedly, the circular economy is bringing a surge of much-needed innovations, new modes of production and new patterns of consumption, including take-back schemes and material recycling. However, in a circular society, consumption relies primarily on the provision of services and not goods. Producing more material goods is not the main answer given by the circular economy but quite the opposite. Instead the circular economy advocates careful, resource-effective, long-lasting and repeated use of existing products and components on the market. This is articulated in the following well-known report published by the Ellen MacArthur Foundation (2013):

“Such an economy is based on few simple principles. First, at its core, a circular economy aims to ‘design out’ waste. Waste does not exist—products are designed and optimised for a cycle of disassembly and reuse. These tight component and product cycles define the circular economy and set it apart from disposal and even recycling where large amounts of embedded energy and labour are lost. “ — “The tighter the circle, i.e., the less a product has to be changed in reuse, refurbishment and remanufacturing and the faster it returns to use, the higher the potential savings on the shares of material, labour, energy, and capital embedded in the product and on the associated rucksack of externalities (such as greenhouse gas (GHG) emissions, water, toxicity).” (Ellen MacArthur Foundation, 2013, p. 8)

In other words, products shall be designed and manufactured for high durability, longevity and functionality as well as easy maintenance, repair and remanufacturing, in order to enable maximum use and reuse in society – with the last stage being material recycling (before composting or even incineration). The circular economy thus depends on cross-sector collaborations and business-to-business partnerships to enable effective logistics for leasing, secondhand, repair, remanufacturing and other forms of sharing and life-extension services. Service provision is a central part of the circular economy, as expressed in the following sentences:

“Unlike in today’s ‘buy-and-consume’ economy, durable products are leased, rented, or shared wherever possible. If they are sold, there are incentives or agreements in place to ensure the return and thereafter the reuse of the product or its components and materials at the end of its period of primary use.” (Ellen MacArthur Foundation, 2013, p. 8)

In other words, a key feature of a circular economy is the design of durable products that can be reused and “shared” by many users, as illustrated by the inner circles (See Figure 1 below). Innovations in the field of textile recycling are thus only one aspect along a spectrum of innovations and new strategies that will be needed to developing a more circular fashion industry. At another side of the spectrum lie design practices and production processes that enable more extensive use of biodegradable materials, non-toxic substances, renewable energy, as well as effective use of water and other resources, preferably in closed loops. In a circular fashion industry, fabric recycling belongs to the last stage of a garment’s lifecycle, as illustrated by the outer circle (see Figure 1).

Over the last decades, many scientists have argued, that if we continue to buy the things we do not need, it will result in a global environmental disaster. This is also a fundamental recognition on which the notion of a circular economy resides. We have already seen too much evidence of what our predominantly linear society leads to, in terms of melting ice caps, more dramatic weather patterns, heavily congested air in cities, polluted rivers, depleted lakes, plastic waste in the ocean, diminishing rain forests, extinguished species, etc. around the world. The environmental consequences of our “take, make, dispose ” system will not only have harmful consequences for people and societies that live in or near affected areas, but also for people, societies and companies that live off these resources, including consumers and fashion companies in Europe and North America. Producing more of the same and then recycling the material is not the best answer, as it will still require energy, labor, water, other material and capital to uphold such processes and surrounding logistics (even if the processes operate in closed systems). Instead, we need to carefully manage all natural and human resources that we have on Earth. Businesses based on material production and consumption will not be able to grow indefinitely without a very high cost for humanity. As Professor Johan Rockström and an international team of 28 scientists pointed out in 2009, there are planetary limits to growth:

“The exponential growth of human activities is raising concern that further pressure on the Earth System could destabilize critical biophysical systems and trigger abrupt or irreversible environmental changes that would be deleterious or even catastrophic for human well-being. This is a profound dilemma because the predominant paradigm of social and economic development remains largely oblivious to the risk of human-induced environmental disasters at continental to planetary scales…” — “Planetary boundaries define, as it were, the boundaries of the “planetary playing field” for humanity if we want to be sure of avoiding major human-induced environmental change on a global scale.“ (Rockström et al, 2009)

In conclusion, an ambition to limit our environmental damage will unfortunately not be enough to avoid catastrophic environmental events. Our industries need to drastically change the predominant business model of “take, make, dispose”. We need to shift from manufacturing good-enough products in large volumes with fast turnover that are sold and hopefully recycled, to instead creating long-lasting products in on-demand volumes that will be cared for, used actively over long periods of time, shared by many users, with components recycled for new uses, and with material recycling being the last option before composting or incineration. This could summarize the basic logic on which future investments should ideally rest.

Note: This article is by no means a critique of H&M’s or any other company’s work and ambitions in the field of sustainability and circularity. Instead, it is an attempt to take a critical view on conventional economics’ approach to growth in light of the circular economy and planetary boundary paradigms. 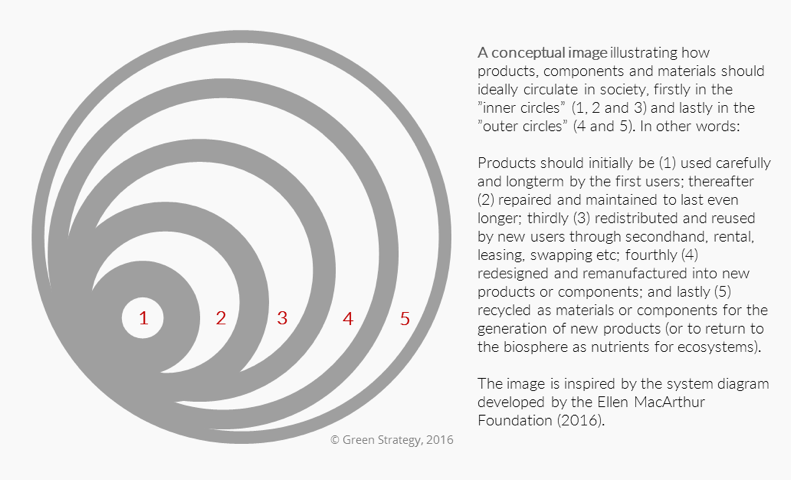