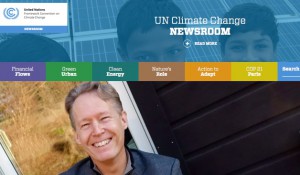 The UNFCCC is featuring Alan AtKisson and his song “Set the World Right Again” on its Newsroom website this week. Click here to go to the UNFCCC website. The article includes the background to the song, the lyrics, and a link to the YouTube version for free listening.

“Set the World Right Again” is a high-energy, folk-rock call to action, with a touch of Japanese influence, from AtKisson’s 2014 album “American Troubadour”. The last verse sums up the song’s message:

In the end it all comes down to love
What you care enough to be the champion of
And believe, no matter how hard it seems,
That it’s possible to live this dream
And set the world right again …

The UNFCCC article also describes AtKisson’s work to promote action on climate and sustainability. AtKisson is a senior advisor to UN agencies, companies, and governments, but he also brings music into his inspirational speeches and seminars.

AtKisson lives in Stockholm and is a dual citizen of Sweden and the USA. The album “American Troubadour” features top Swedish musicians, and “Set the World Right Again” is now being prepared for wider global release as a single.

UNFCCC is the UN body managing climate change negotiations and the upcoming Paris climate summit. Featuring “Set the World Right Again” is part of UNFCCC’s effort to reach out beyond policy circles and engage a broader public. Its Newsroom has invited songwriters to “be part of the global movement in support of a meaningful new universal climate change agreement to be concluded in Paris in December.”

For more information about Alan AtKisson’s music, as well as his books, consulting work, and the “one-man musical show” about sustainability that he performs at universities and other venues, visit his personal website, www.AlanAtKisson.com.

Set the World Right Again and the album American Troubadour (as well as all of Alan AtKisson’s albums) are available on iTunes, Amazon, Spotify, YouTube, and most streaming services around the world.