A SPECIAL REPORT FROM WAVEFRONT (THE ATKISSON GROUP NEWSLETTER)

For sustainability-workers and UN-watchers, today was a big day. UN Secretary-General Ban Ki-moon delivered his long-awaited report to the General Assembly, with his take on the future of sustainable development. The big surprise? The fact that it’s all in there … from tackling climate change, to moving beyond GDP, to ensuring human rights and dignity for all, to … well, everything. Sustainability, according to the SG, should basically be everywhere. “Simply put,” he writes, “this generation is charged with a duty to transform our societies.”

Many wondered whether the SG would propose keeping the 17 Sustainable Development Goals as is, or simplifying them into a smaller number. In the end, he did something totally different. He proposed a “transformational approach” that includes the SDGs, as adopted by the member states, but he added to the mix a simple framework of “six essential elements” to make SD easy to grasp and to communicate.

This new graphic, from the SG’s report, sums up his approach. Let’s call this image the “Sustainable Development Rosette”: 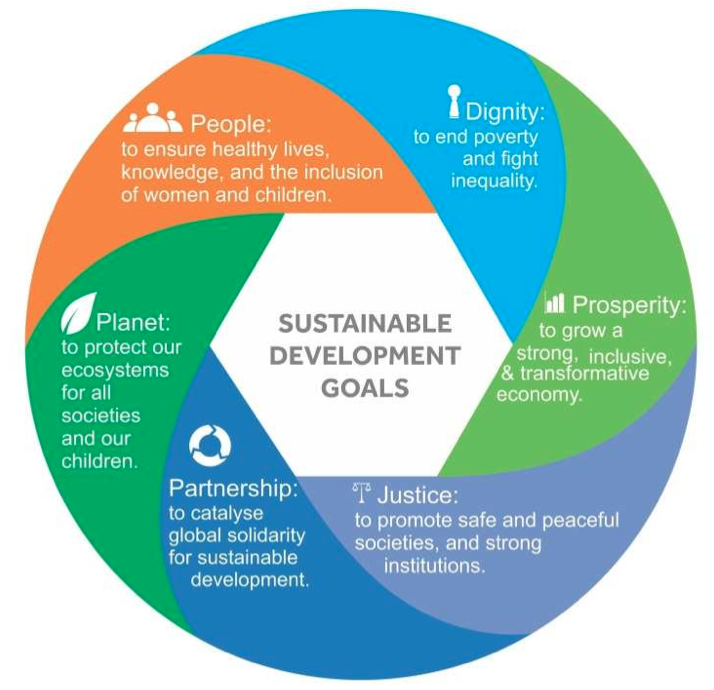 The SD Rosette (my term, not his) does not replace the 17 draft SDGs. It just gives them a more user-friendly framework. We’ll see what this framework means in practice later, but I personally think that its introduction was an artful solution to a politically tricky problem. SG Moon did not tamper with the carefully balanced inter-governmental consensus on the 17 goals. But he still gave the world the simplified framework that loud voices such as Jeffrey Sachs and David Cameron had been clamoring for. Potentially, he made everybody happy.

The 169 “Targets” from the draft SDGs are another matter: the SG clearly suggests that these should be reviewed from a technical perspective, to make sure they are all logical and measurable. That means the Targets will probably be whittled down and rearranged in the coming months.

Of course, the SG’s report is also full of semi-bureaucratic information on the financing, economics, implementation mechanisms … but the main thing I came away with, after reading this document for the first time, was a sense of gratitude.

The sustainable development agenda that so many of us have been working for, so hard, for so long, has come to the point where it is a fully integrated and mainstream part of global thinking. The whole thing. From “subjective wellbeing” to “decoupling” to the “integration” of complex systems, the UN Secretary-General included it all, in an agenda framed from the outset in transformational terms.

On first look, I believe this new SD Rosette — a symbol for the integrated perspective that it represents — is a good, fresh, and easy-to-communicate start to the establishment of a workable and inspirational “Post-2015 Development Agenda” (I really look forward to when we no longer have to use that awkward phrase). Congratulations to Ban Ki-moon are in order.

But now comes the hard part. Making it all happen.

To download and read “The Road to Dignity by 2030,” the Synthesis Report of the Secretary General, released today (4 Dec 2014), click here.

Members of the AtKisson Group are dedicated to supporting the global process of sustainability transformation. For information, visit our website.

This is a special UN-focused edition of WaveFront. Our regular newsletter, reflecting on sustainability and change more broadly, will return shortly.